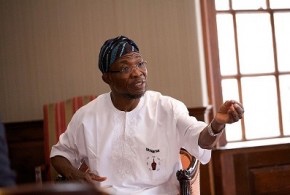 On Monday December 19, three newspapers, The Vanguard, New Telegraph and Daily Trust ran a syndicated story, almost verbatim, an allegation from Osun Peoples Democratic Party (PDP), signed by Diran Odeyemi, that Governor Aregbesola is planning to divert N11 billion Paris Club debt refund that Osun and other states got from the Federal Government a few days ago.

Not only is the story false and misleading, it is a disservice to the cause of truth and information dissemination on the part of the media. Anybody can make an allegation, but a media organisation is obliged to publish only the truth it has verified from its own investigation. The alleger talks of a ‘plan’ but he did not outline any detail and did not offer any evidence. It seems as if the standard of media integrity is just to have an email or printed copy of ‘Press Release’ from Osun PDP and slam it on the pages.

What then is the exit strategy for any media organisation that published any allegation without investigating, when the story turns out to be false, as it always is? How can we build trust and integrity in our news if we publish falsehood and reduce our medium to the opposition’s propaganda rag-sheet?

But Osun PDP has become notorious for making wild and false claims, just in the guise of playing opposition. A few examples will suffice. When Osun got a Federal Government guaranteed loan of N34 billion last year, the PDP alleged that the money had been used to pay contractors handling projects in the state. Less than 48 hours later, it again claimed that the money had been put in a fixed account. The newspapers that ran both stories had their credibility questioned by perceptive readers. How can the government that paid contractors with funds meant to offset outstanding salaries of workers turn round to put the same funds in a fixed account in a bank?, they asked.

Again, after the PDP woefully lost the 2011 general elections to the then ACN which cleared the three senatorial seats, the seven House of Representatives seats and all the State House of Assembly seats, PDP was quick to blame the loss on the allegation that the then INEC resident commissioner in the state was a card carrying member of ACN. This was their swan song for four years and in the run up to the 2014 governorship election, INEC then asked the party to bring any evidence to back up this allegation. Till today, it never did.

Since PDP lost power on November 27, 2010, its stock has been diminishing in the state. All its leading lights, including two former governors, are now in the APC’s progressive fold. It has also been badly bruised in all the elections conducted in Osun, which it lost woefully. These are the 2011 general elections, the 2014 governorship election and the 2015 general elections. The party has been deserted and depleted. What we are having now is the empty drum of the rump of the vanquished party making very loud noise as it permanently rolled out of Osun, hopefully into the Asejire River enroute the Atlantic Ocean. It is perfectly understandable therefore as it acts like a scorched snake struggling frantically but futilely as it gasps for its last breath.

The party has capitalised on the financial crisis that gripped the Federal Government and 27 states, occasioning delay in salary payment and has weaved all kinds of imaginable falsehood around it, even advocating for abridgement of federalism.

It has been inciting workers and retirees against the State Government. By continuing to milk the trauma of the workers, Osun PDP has revealed its true hand in a Freudian slip of its rejoicing and happiness on the inability of workers to get their salaries as and when due. It will continue to revel in this misfortune of the workers in order to stack its card in the opposition to the Aregbesola administration.

Nevertheless, the workers are smarter; they have been reasonable and faithful to the state government and have refused to play the PDP game of using their back to ride to power.

This is because, their personal interest aside, they have seen the difference between the two parties. They can compare PDP’s seven and a half years with Aregbesola’s six years. They have compared the 170 elementary, middle and high schools Aregbesola is building with the shoddy renovations carried out by PDP in the two terms of the party. They have seen the over 800 kilometres of roads, including local government roads and four super highways constructed by Aregbesola and cannot find anything close to it during the PDP era. Improved security, enhanced health-care delivery, support for elderly citizens, ambulance services and a huge commitment to social protection programmes. Their children have been eating free sumptuous and nutritious meals every school day since 2012; their final year pupils were given eLearning tablets (Opon-Imo) and the 46.3 per cent pass in the last WASSCE was unprecedented in the annals of the state. They have seen artisans and farmers access close to N4 billion micro-finance loans. PDP never had anything close to these in the seven and a half miserable years the party was in power in Osun.

Even then, the party continues to mount assault on federalism. The state government took a principled stand on federalism by refusing to cooperate with the Senate in its botched bid to audit the account of states that took loans guaranteed by the Federal Government. This is because the proper body constitutionally empowered to do so is the State’s House of Assembly.

Is it not curious then that Osun PDP has mounted this dangerous assault on federalism because it wants to gain cheap popularity?

George Santayana warned us that those who failed to learn from history are doomed to repeat it. Maybe the PDP has forgotten that incitement of the Federal Government and brazen unconstitutional use of its power against the Western State brought about the demise of the First Republic. The rest of us should not.

Justice Now Foundation is based in Osogbo, Osun State