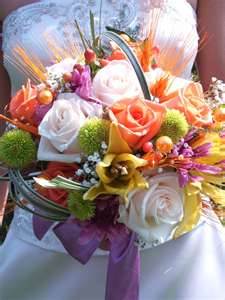 Unknown gunmen went berserk on Sunday morning, killing a woman and two staff of Dantata and Sawoe Construction Company at Kawon Maigari quarters in Kano metropolis.
This came barely 24 hours after a Police Inspector was shot dead outside his residence at Unguwa Uku in the crisis-ridden state.
Eyewitness said the gunmen, numbering three trailed the victims to an area at about 11.00am on a motorbike where they opened fire on them.
The source added that the victims include a suitor and his fiancee who were going for a meeting ahead of their wedding.
“The attackers trailed behind them on a motorcycle until they got to their destination before they shot and killed them”, said a witness.
It was gathered that the slain lady, simply identified as Maryam, came to Kano from Nasarawa State recently in preparation for her wedding.
Confirming the incident, the acting spokesperson of the state police command, Mustafa Abubakar disclosed that other two victims were employees of Dantata and Sawoe.
The police boss who also confirmed the Saturday’s killing of Inspector Aladu, who was attached to Unguwa Uku Division said the police is currently investigating the matter.
source:dailypost
Posted by Victor at 12:37 No comments:

Policeman in Lagos who owns hummer jeep arrested for robbery

The tale of how of a new generation bank at Akowonjo, Lagos, was robbed last year won’t be complete without the mention of Eboma Onyeka, a Police Sergeant who was at the time of the incident attached to the Mobile Police Unit 20, at Ikeja.
Onyeka had allegedly conspired with four others, including an employee of the said bank and robbed the bank he was to secure of about N10m in April 2011. A security guard attached to the bank, Sunday Ogundipe, was strangled in the process.
Two months after, Onyeka was arrested, tried and dismissed from the force before he was arraigned with his accomplices on armed robbery and murder charges in July 2011.
However, Onyeka is once again a guest of the Special Anti-Robbery Squad, Lagos, months after securing his bail. He is said to have been involved in a series of bank ATM robberies since his bail from Kirikiri Prisons in December 2011.
But Onyeka strenuously denied his involvement in any bank robbery attacks and he was quick to give a recap of his activities since his bail from prison.
“After I got my bail, I left Lagos for my village in Delta State. I stayed there for about two, three months because I was ill and needed to recover. When I was fully recovered, l went to Benin City and met a friend whom I pleaded with for assistance. My friend gave me an Audi car to use as a taxi, so I could earn a living. I also underwent a 10-week course in producing insecticides and fruit juices.
“Upon the completion of my course, I returned to Lagos because I needed to start a business of my own. Since there was no place for me to go, I called a friend of mine who is a serving police inspector and he asked me to see him. My wife had returned to her family with my children after I got into prison, so I had no home in Lagos. All this happened in August 2012. It was the very day that I arrived Lagos that I was arrested by SARS operatives. I still had my toiletries on me,” Onyeka said.
However, the Lagos State Police Commissioner, Mr. Umar Manko, disclosed that Onyeka was arrested after the spate of bank ATM robberies in Lagos metropolis went up.
He said, “In the months following Onyeka’s bail from prison custody, we started getting reports of bank ATM robberies nearly every weekend. Prior to his arrest last year, there were only two gangs responsible for bank ATM robberies in Lagos: Onyeka’s and another gang. As at the time he went to prison custody, the ATM robberies had reduced to the barest minimum.
“So when reports of ATM robberies began to come in, we decided to check with the prison to confirm if Onyeka was still in their custody but he wasn’t. We began investigations and we were able to obtain his number. Through his phone number, we were able to track his movements until he got to Lagos and thereafter we rearrested him. His gang was responsible for the recent robbery of a new generation bank where a police corporal lost his life.
“At the time of his arrest, Onyeka had in his possession a fake identity card which portrayed him as a serving member of the Mobile Police Force. When SARS operatives stormed the hotel where he was meeting with a friend, Onyeka had flashed his card to the team, not knowing that he was the target of the raid.”
Findings indicated that Onyeka was granted bail at an Igbosere High Court 14 in December 2011 through a motion on bail application notice. His lawyer, who identified himself as T.J. Ajapuno, said, “In law, everyone is considered innocent until proven otherwise. Onyeka’s wife came to see me, requesting my services so that her husband could get bail and due process was followed. If Onyeka went ahead to start robbing again after his bail was granted, that is his own cup of tea. His wife and his pastor had stood for him as sureties.
“We served the police and the State Criminal Investigative Department at Panti got a copy of the bail application. The Directorate for Public Prosecution got a copy too. I wasn’t even aware that the DPP’s advice was out; I don’t have the facts of the case and the DPP doesn’t even have Onyeka’s file. It is not as if the case is over, the substantive matter is before Justice Okunnu at the Ikeja High Court.”
Since his bail, Onyeka had had no further court appearance. “Although I was in touch with my lawyer and one of his subordinates, they told me that they would contact me if anything came up,” he said.
Before his arrest in July 2011, Onyeka had just completed a training course for inspectors and was awaiting promotion to same rank. Published reports said Onyeka was arrested in his private Hummer Jeep on his way to keeping an appointment with other members of his gang around 1.30 am on July 26, 2011.
Onyeka allegedly had in possession, an AK 47 rifle and a big bag containing a face mask and other suspicious items. Before his dismissal last year, the 41-year-old had served the Nigeria Police Force for 19 years. 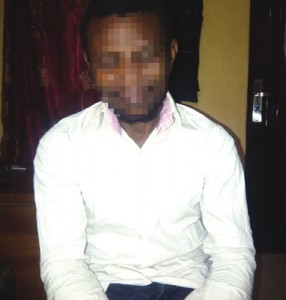 Source: Olufamous
Posted by Victor at 11:59 No comments: 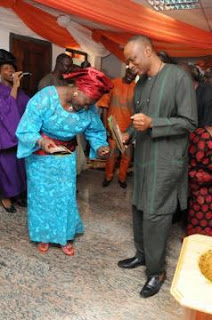 If you come back from a battle a victor, this is the kind of dance that should come to mind..... picture shows Gov. Olusegun Mimiko and wife, Kemi dancing and giving praises to God after the Ondo election.
Posted by Victor at 11:38 No comments: