Tinubu Reveals His Iragbiji Roots !!! ...Plus His Messy Dirty Past 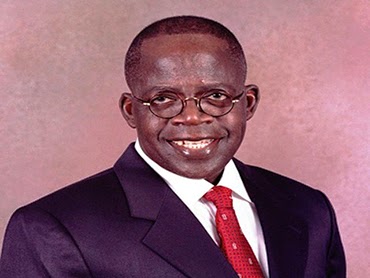 Asiwaju Bola Ahmed Tinubu has finally revealed and confirmed his Iragbiji roots. That he indeed hails from Iragbiji, a sleepy town in Osun State was certified by the man himself in a 1990 Nigerian Passport issue he signed and used up till 1992 at least.
On page 2 of the Passport, Tinubu filled IRAGBIJI, in the Place and Date of birth column. The two other discrepancies in the Passport were YEAR OF BIRTH , which he put then at 1957 and a name no one knew him to go by, ABIMBOLA.

This truth-telling via the past finally rests the debates, arguments and controversy over Tinubu’s real origins. He had always insisted he was a member of the famous Tinubu Family, but bonafide members of the family had disclaimed him in an elaborate effort which included the publication of a book titled, Onijumu Wura : The Tinubu Dynasty of Kakawa Street.There was a feeble attempt by about three members of the family to discredit the claims in the content of the book, but it was not an attempt which answered the queries and assertions in the publication. The attempts were rather more abusive than sensible .Many wrote it down at the time to efforts at getting “settled” by Tinubu whose settling inclinations were said to be unrivalled.
On this score, many real Lagosians have been dissatisfied with folks from other Yoruba countries coming to dominate their political scene and calling the shots which often silenced their own preferences. Another of such, they claim was playing out in Epe against the next gubernatorial preference of Lagosians. Ambode, they said was from Ilaje in Ondo State, but he was the one Tinubu intends to force through. They insisted it also played out at Fashola’s emergence and vowed to do all it would take this time to stop an Iragbiji man from telling Lagosians how to run their home.’ This culture of alien lords in Lagos has to stop and we will stop it, Insha Allah”. One of them fumed.
On page one of the Passport in the possession of NP, the pointed use of the name ABIMBOLA raises another question. Tinubu was not known to bear ABIMBOLA. These variations often fool foreign security systems personnel who often ignore the changing prefixes of Arican, nay Yoruba names. Such discrepancies also have the capability to divert the programmed focus and function of a computer. The point at which ABIMBOLA came into use in this 1990 Passport issue was a time Tinubu was in the thick of his drug trafficking and money laundering trial in Chicago, United States. He was doing a lot of shuttling then between Asia – Honk Kong, Europe – Germany and U.K and the United States in North America . It is not clear if the heavy funds in his sundry accounts were also moving with his feet, but ABIMBOLA could have come to “good” use for him at this time.
The 1957 year of birth on page 2 of the Passport brings to three the number of YEARS OF BIRTH which the leader and financier of All Progressives Alliance (APC) would present in his few years in public life. The first was 1954 which he filled in his INEC form CF 001. This set him on collision course with the Late Chief Gani Fawehinmi, widely regarded as the conscience of the nation and an activist who did not collect money from tainted politicians.Gani disdained fraud and loathed fraudsters.
He submitted before the Lagos State House of Assembly on Thursday, 23rd September,1999, that he made  mistakes in the initial filling. He said that his actual and true year of birth this time was 1952. It was interesting that the lawmaking House saw and treated glaring breaches of the law as mistakes which should be pardoned. “Heavyweights” like Professor Wole Soyinka, Femi Falana and the Late Beeko Ransome Kuti, worked assiduously to check Gani Fawehinmi’s move against the fraud. Their efforts   even received complements from thugs who attacked Chief Fawehinmi and destroyed his S.U.V. going to Igbosere Court.It was a season which raised a question on who was on the side of the people and who was on the side of money.It was a question answered but not ever said.
The third and hopefully the final year of birth to be presented by the Governor Emeritus is this Iragbiji version which again changes his YEAR OF BIRTH to 1957. Tinubu’s true year of birth is hardly of any serious worth to anyone, but the persisting danger in it is trusting a man who lies very easily and so frequently with the political destiny of any one person, let alone millions of people. By far the most embarrassing of this politician’s shifting profiles, often under oath is his true origins which NP finally nails to the long-suspected IRAGBIJI.

Many indigenous Lagosians believed (in the absence of hard evidence) that he was truly one of them. It was on this score that he lorded it over the political space of Lagos since 1999. Shoving ndigenes aside and often telling them to go and form their own party if they could not live with his choices. They too, often whimper into silence and resume the scramble for his crumbles. Many who did not actually believe he was a Lagosian played along because he had built himself into the largest largesse dispenser in town and you got nothing without his approval, forget about the governor. Tinubu often personifies the state when it caught his fancy. He was known to frequently tell guests and alms-seekers who thronged his Bourdillon residence – “LAGOS IS GOING TO BED” or “LAGOS IS TIRED” meaning everyone should return another time as he was tired or going to bed.
An Adejumo of Oke-Offa and Agbeni compounds in Ibadan swore he knew Tinubu, his real mother and Oluremi Tinubu, his current wife, who according to aides you dared not address any longer without adding Senator. They confided in NP that the Senatorial seat was considered by her to be the greatest gift her husband ever gave her. Old Mamora was shoved aside to please madam.
Adejumo, who said he was well acquainted with Tinubu, added the Jagaban of Borgu’s real name was Kunle Adeleke and that Tinubu resided at Kudeti, a squalid quarters of the ancient town.He claimed to be very familiar with Mrs. Tinubu (Nee Ikusebiala) whose family was at U.M.C. Oke Ado, Ibadan. Adejumo calls into witness notables in Ibadan society like, Abinusawas,Laniyonus, Layodes and Adeyemo-Operindes. He says:
”Let Tinubu go and tend to the unmarked, unkempt graves of his father and mother at Shangodele Compound in IRAGBIJI first”
Tinubu had survived a lot of scams and oath-breaching which could have sealed his political fate much earlier by showing the real man under the mask. However, his luck ran on based on a few factors:
1. The criminal justice system in Nigeria which is known to be available for purchase.
2. Widespread ignorance owing largely to a debilitated education system which grows worse by the day. People find it difficult to relate Tinubu’s stupendous wealth and power in such a short while to their own untold poverty and helplessness within the same span. They often see the corruption at the center as their only problem.Many actually, truly believe that he fights for them.
3. Some high-profile Yoruba people in whom the people reposed a lot of trust and confidence ended up “working” to cover up the Tinubu Reality: He always managed to find their price tag.
4. Some did not know how bad the profile was until it was too late. They had fed too much to turn back.
In other words, the good ones who live in regret and remorse still work for him by keeping quiet about their discoveries and other details. It is therefore, a huge jest when they bring out their selected diagnosis and prescriptions to Nigeria’s problems.
The IRAGBIJI gambit is an especially huge one on Lagosians who love to stake a big claim on their wit and intelligence. If they knew for a clean fact that Tinubu was from Iragbiji, he might have needed more than money to become governor.Perhaps, the story would have then, been different.
Alhaji Adebola Adekunle Adeleke Ogunlere Amuda Ahmed Abimbola Tinubu:
Born in 1952, 1954, 1957 from IRAGBIJI on Lagos Island;
Of Unknown father, unknown mother or any surviving/known blood relatives.
Convicted and fined $460,000 on charges related to drug trafficking in Illinois and Indiana.


It now becomes tough for any political party to bring this profile out (without first addressing the issues), as a profile which is within its brain-box, or to fly its banner, seriously as one who should be listened to about anything, let alone integrity.
The man was not jailed for drug trafficking because it was not the case before the court, but he was fined (a convict) for breaching the laws of the United States. The convict Bola Tinubu had been in control of people’s funds, destiny and life since 1999 even beyond his term in office.
Since 1999, Lagos had received about 4 trillion Naira, the large bulk of which came from tax payers, with more media hype than performance to show for it. About half of this was handled by Tinubu, a man who could not explain to the U.S. justice system how he came about millions of dollars in his accounts at a time his salary at Mobil was $2,400 (two thousand, four hundred dollars only).
In spite of the grandstanding which hardly fools anyone,there is hardly any crime in the book which Tinubu had not been accused of outside murder. Some people are not convinced about that either as they insist he was the greatest beneficiary of the Engineer Funso Williams assassination. Murders are commonplace in the world of narcotics and money is usually the exclusive focus. Certain reports claim no powerful Nigerian politician operates without a killer squad. They said it was to create a balance of terror in their fold or to deal with “stubborn” interests.
Drug trafficking, money laundering, treasury looting, land grabbing, judge bribing, lying under and over oaths are just a few of the accusations and charges. Running a foreign account while in office was somehow bungled by the system operators.
The heat which built up between him and his hand-picked Lagos State governor, Alhaji Raji Fashola was over the latter’s initial move to stop a monthly bill of about 3 billion Naira paid to the godfather – Tinubu’s Alpha Beta company. Also in contention was a greedy share of heavily padded contracts. Most people thought, well, at last he met his match, but they could not have been more mistaken. Fashola turned out to be one apple which fell quite close to the tree.
Alhaji Raji capitulated and resumed payment as his first time drew to an end.He knew there was a fobidden hill  to climb and cross to second term if he did not find his way back into Alhaji Tinubu’s book. Not only has the tax collection regime extended to the rest of South-West states (thankfully excluding Ondo State), but the defunct ACN governors are paying unspeakable royalties to Bourdillon in state funds and outrageously inflated contracts mostly through the reigning Chinese engineering company. The most disheartening part is that all the states are deep in debt, with Lagos state owing about six hundred million dollars to be paid over the next 69 years.
Alhaji Aregbesola borrows to buy private helicopter in povrty-striken Osun and the debtors’ beat just goes on all over Tinubu-controlled states.The people sleep and the roof is on fire.