(A reader sent me this)

.If You Are The One...What Will You Do......?
he photo above shows a 31 yr old married woman and a 67year old married man caught point blank naked having s£x in a chalet. From the photo, the lady though cover her face as not to be identified.
But unfortunately for her, she has been

finally identified as a Diezani, a mother of two.

However, as soon as Diezani got employed and started work, My Reuben immediately becomes a Mechanic servicing Diezani somebody else's wife. Bubble busted when a Barn-again colleague of Diezani, who always see them around a local chalet in his area couldn't stomach this shameless act immediately contacted the Husband.
Finally, during one of their pumping session, the two adulterous couple got busted by Diezani's husband. The latest matter now is Divorce, Diezani has been sent packing. 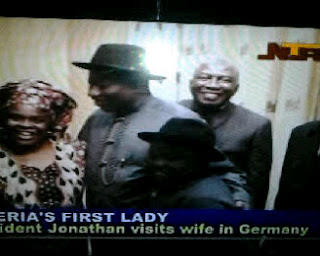 The questions as regards the state of health of Nigeria's 1st lady, Dame Patience Jonathan can be put to rest now.
We can authoritatively confirm that she is back on her feet and was her cheerful self  when her hubby and President of Nigeria visited Germany to see her.
Posted by Victor at 07:57 No comments: