I Am Ready for Trial to Clear My Name, But… Dasuki …. Accuses FG of Denying him Access to Lawyers 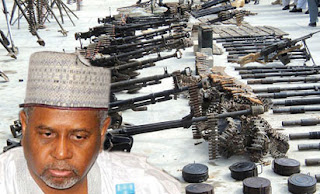 The former National Security Adviser (NSA), Col. Sambo Dasuki rtd has restated his desire to have free access to his lawyers to enable him defend himself and clear allegations against on the criminal charges of unlawful possession of fire arms brought against him by the federal government.

Dasuki told Federal High court in Abuja that the Federal Government no longer has moral and legal rights to continue his trial having disobeyed the order of bail granted him since November 3, 2015.
In his argument by his counsel, Mr. Joseph Daudu (SAN), Dasuki premised his prayer on the fact that the government is in contempt of the court in relation to the charges filed against him.
Daudu while arguing the motion claimed that since November 3, 2015, when his client was re-arrested by operatives of the Department of State Service (DSS), after perfecting the bail conditions, he has since been held in custody without trial or reasons made known to him.


The counsel insisted that the bail order that admitted Dasuki to bail remained valid having not been reviewed or set aside by the court and as such it must be obeyed in the interest of justice.
He claimed that his client cannot be lawfully prosecuted by government because his right to prepare adequately for his defence as enshrined in the bail and the constitution has been violated because he has been kept away from his lawyers.

The counsel also stated that section 36 of the 1999 constitution presumes his client innocent until the guilt has been established against him and that for now, the provision of the law has been turned upside down by his re-arrest without trial since last year.
"We must state here that since his re-arrest at the Kuje Prison after perfecting his bail condition, we have not been allowed access to him. We are at the cross road and only the court can right the wrong in this matter so that the defendant will have time and facilities to defend himself.
"Investors are watching the court and the situation, especially where government is choosing to disobey a lawful court. Absolutely power corrupts absolutely, and we must not send a wrong signal to the outside world that we have no regard for the rule of law."


He therefore urged the court to prohibit the trial of Dasuki until the government has done the needful.
However, in his opposition to the application, counsel to the federal government, Mr. Dipo Okpeseyi (SAN), urged the court not to grant the application because its purpose was to frustrate the trial and restrain the power to prosecute a criminal charge.
Okpeseyi claimed that the bail granted the defendant did not prohibit his re-arrest in connection with any other matter.
Okpeseyi also claimed that no material was placed before the court to show that the government violated the bail order and that there was also no evidence that government is preventing him from defending himself.
Okpeseyi argued that merely looking at Dasuki, he is looking clean, fresh and well-catered for in the custody.
He therefore urged the court to dismiss the application.
After listening to arguments from both parties, Justice Ademola fixed ruling on the application for April 4, 2016