Uppercut! Judge throws out Okoroji's Case Against Legal @COSON Board

When it rains, it pours. The noose around the necks of Tony Okoroji and his band of puppets tightened further with bruising defeat at the Federal High Court on May 23, 2019.

Presiding over SUIT NO. FHC/L/CS/606/2018 - Copyright Society of Nigeria and Ors v. Efe Omoregbe and Ors, the Honorable Justice Saliu Seidu ruled in favour of defence counsel, Barrister Dapo Ademola's (AOA Legal) preliminary objection, challenging the authority of the 1st plaintiff to commence the case and the jurisdiction of the honourable court to hear the suit. Justice Saidu ruled to strike out the names of the 1st - 6th defendants and the entire case eventually.

Tony Okoroji, a serial litigant whose desperate and illegal hold on the reins of COSON may have cost the society over N50,000,000.00 in legal expenses over the last 18 months (COSON admitted to N34m plus in their 2018 account) suffered the damaging loss in the directorship case filed against Efe Omorogbe, Sikiru Agboola, Obi Asika, Joel Ajayi, Dare Fasasi, Audu Maikori and others.

Justice Saidu's judgement signals the beginning of the end of the litany of frivolous suits filed by Okoroji in the name of COSON to shackle the regulator, gag the oppposition, muddy the waters, harass users and generally buy time while seeking vistas for a political resolution that would sweep all his alleged infractions under the carpet.

The devastating legal uppercut COSON suffered at yesterday's hearing digs a damaging hole in Okoroji's posturing as an invincible juggernaut who knows his way around the courts and always gets vindication in the long run even though he's suffered debilitating loses against PMAN, MCSN, Mayo Ayilaran and many others in the past.

More importantly, the ruling digs a hole in about a dozen other cases against the NCC, broadcasters, the legal board, Efe Omorogbe, Audu Maikori, Joel Ajayi, Dare Fasasi, Pretty Okafor and even officers of the NCC. Cases funded by rights owners' royalties to serve the purpose of an intransigent director against the widely published wishes of the members on whose repertoire royalties are collected in the first place. 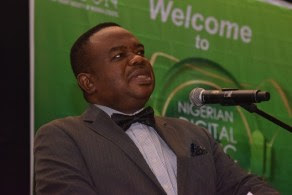