Recent statement credited to Senator Ibikunle Amosun, positing that he inherited a failed state from OGD is at best ludicrous. Amosun, who is at the twilight of his administration has embarked on a self-adulating adventure across all news media, as a last palliative to his badly bruised ego. One of his strategies is to promote the narrative that his administration was too remarkable to be compared with any other and as such deserves the eminence of being succeeded by a person of his choosing. It is no longer news that his ubiquitous effort to foist Akinlade on the people of Ogun suffered hard punches both at home (in his party APC) and abroad (with APM). This was despite travail at frustrating opposition during political campaigns and the loose-belt election budget, reported to have been funded from state treasury. Aftermath of the shocking defeat to Dapo Abiodun (a candidate who barely had the chance to campaign in the state without resistance, or even implement his plan for billboards, posters and other OOH), Amosun has been engaged in vile attacks on everyone he feels had a contribution to Dapo’s success. Social media even made a mockery of his fruitless flights to Abuja for picture panorama with the president in a bid to appeal to Buharists. 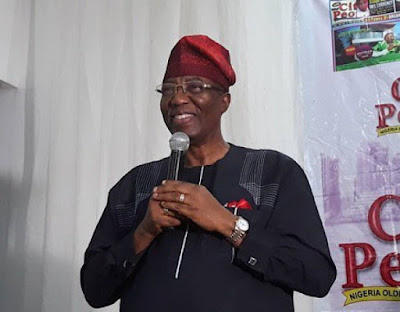 It is therefore not strange that OGD is on the lips of Amosun at this moment. First, we all know how Gbenga Daniel surreptitiously used his political structure to ensure Dapo Abiodun’s victory. Second, how can the almighty Amosun not find a way to explain how unpopular his government has become. His error though is that he drew a mirror too close to his hanging balls while trying to reflect the nudes of his predecessor. That Ibikunle called OGD’s government a failure, means one of these two things; its either a case of psychosis or a pitiful deficiency in grammar. For what it’s worth let’s treat Amosun’s claims of achievements on its merit and juxtapose with that of OGD’s, to provide perspective.

Amosun claimed that when he assumed office in 2011, investors were running away from the state, “because of high level of insecurity”! Well, that may be a figment of his imagination, because during OGD’s 8 years, major multinationals, among several industries, built and opened their factories in Ogun. Nestle Foods, Dangote Cement at Ibese, Multirex Cocoa Industry, Coleman Wire &amp; Cable, to mention a few, came on stream to provide jobs for Ogun people. The facts are there to be verified. On the contrary, during Amosun’s administration, PZ Cussons, Glaxosmithkline announced their exit. On the matter of insecurity, Amosun’s administration had its infamy on matter of insecurity. Under who’s watch was the scary rein of the’ Bado Boys’ of Ikorodu/Sagamu, the militancy at Arepo?

Amosun claimed his government grew the state IGR from N700million to N7billion.Even though this cannot be verified, let’s still take it for a fact. The import of this is that the government of Senator Ibikunle Amosun had an extra monthly income of about N6.3billion that his predecessor hadn’t! Judging by this, what was Ogun doing among the committee of debtor-states with respect to workers’ salaries and allowances? Lagos state who is famous for its sporadic IGR growth owed none during same period, a proof of independence, the glory Senator Amosun is trying to lay claim to. More so Amosun’s strategy was to use part-payments as gloss, so he could confidently claim not to owe. But as at press time the total deductions from Ogun state worker’s pay was estimated to be over N20billion. There is general anxiety among workers that they may never get their monies, and definitely the debt will be passed on to the new Dapo Abiodun’s government. The OGD’s administration that the Senator claimed left a failed state, didn’t leave a wage-debt burden. It is also appalling that during this period (last four years) the state is estimated to have made an extra N302billion income besides federal allocation (going by Amosun’s IGR claim)!

There is not doubt that the masses were the last thing on the mind of this administration. Amosun ran an elitist government, which was in sharp contract to Gbenga Daniel’s inclusive government. The roads and bridges Amosun and his Chinese friends built across the state were at the expense of people’s livelihood. The essence of infrastructural development is to enhance livelihood not kill it. Pulling down shops, houses that the poor’s live-line, with was no big deal to his government. OGD had a more humane approach to infrastructure development. When OGD was to embark on the dualisation of the Abeokuta-Kobape-Siun-Sagamu highway, turning it into a 37.5 -kilometre express road, he first built brand new brick houses with electricity for the owners of houses on the projects path. These were people who owned mud houses, and lived with no electricity. It was only after the people where relocated that project kicked off. In fact some residents of Orile Imo whose mud houses were far from the road and were not marked for demolition trooped to the Governor’s Office, lobbying that their shanties should be demolished and replaced with this new luck OGD bonanza houses.

To cap it all let’s do a refresher very few OGD projects:

a. Dualisation of Abeokuta-Sagamu road, Lalubu road and a host of others.

b. Building of new stadia at Ijebu-Ode, Sagamu and Ilaro; and transformation of the existing MKO Abiola Stadium in Abeokuta.

c. The Olusegun Obasanjo Hilltop Estate, the OGD workers estate (which made 1000 civil servants of all grades including drivers and messengers to become landlord and landladies)

d. Transformation of Olumo Rock, turning it into a money-spinning machine with the introduction of an elevator to take tourists to the top of the rock

e. Other landmark projects were also underway before Amosun came in and thwarted them. Some worth mentioning are the Agri Cargo airport, Olokola deep seaport project as well as Ogun Guadong.

These are physical projects that are still available for verification. How all these achievements somersault into leaving a ‘failed state’ is bereft of common sense.

As Senator Ibikunle Amosun spends his last days as the executive governor of Ogun State, many would expect that he embraces fate, accepts defeat and move on to an elder statesmen position, providing guidance for subsequent governments. OGD is doing this just as well as those before him. Casting aspersions is not only a disservice to humanity, but a slap on the face of Ogun people, who had to endure 8-years of his draconian government. But as they say, common sense is not common.
Posted by Beprobe at 18:22