Heresy in the House of Oduduwa – By @DeleMomodu 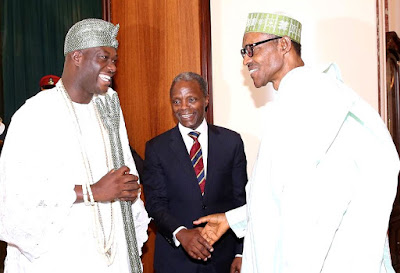 Fellow Nigerians, let me take you on historical excursions today. At this unfortunate time that History is not a compulsory subject in our school curriculum, it is pertinent to educate ourselves properly about our dear beloved nation. For those who may not know, Ile-Ife is the ancestral home of all Yoruba people. Please, ignore attempts by all manner of historians attempting to rewrite history. Ile-Ife occupies an eminent space on the world map today, and as far back as I can remember.


I’m proud to have been born and raised in that ancient town. I was born in 1960, just before Nigeria attained Independence, in a neighbourhood called Obalufon, a stone-throw from Sabo, where the Hausa community lived, and still lives today. My father had migrated, according to oral history, from Ihievbe, now comfortably situated in Owan East Local Government of Edo State. He met and married my affectionate mother and I’m the only product of their conjugation.

Ile-Ife welcome hundreds of immigrants from different parts of Nigeria and beyond and we were fully integrated. We lived in peace, and as one. Ile-Ife produced four Deles in journalism and three of the four – Dele Giwa, Dele Agekameh and Dele Momodu – had their origin in present day Edo State. The fourth, Dele Olojede, is from Modakeke, and lived close to Ojoyin and Akaraba roads in Ile-Ife. No one could tell the difference. We can easily be called bonafide sons of Ile-Ife and you won’t be wrong.

I spent 26 out of my first 28 years fully in Ile-Ife, the other two years was used serving the former Deputy Governor of Ondo State, Chief Akin Omoboriowo, of blessed memory. I also served The Ooni of Ife Oba Okunade Sijuwade Olubuse II. I had studied Yoruba for my Bachelor of Arts degree and graduated in 1982 and returned in 1986 to enrol for a Masters in Literature-in-English and finished that in 1988. I’m therefore humbly qualified to regard myself an authority on Ile-Ife. I can vouch for Ife people as very friendly and welcoming people despite the internecine wars that ravaged the town and halted the peace we all enjoyed growing.

In my close to 57 years on earth, I have come to see Ile-Ife as a modicum tolerance and accommodation. Ile-Ife plays host to one of Africa’s greatest university. I’m mightily honoured to be an alumnus of University of Ife, now Obafemi Awolowo University. Most of our lecturers and non-indigenes usually build their homes in the town upon retirement because of the comfort and serenity provided by Ile-Ife.

I’m very familiar with the Sabo area of Ile-Ife. My father had worked with the Public Works Department, not far from Sabo. He also owned a small hotel and restaurant in Sabo and catered to the Hausa Community. My mum was also a food-seller by Ilare Prinson, and we lived in Ogboku road, by Akui Road, all very close to Sabo. I never heard of skirmishes between the Hausa and the Ife, or anyone for that matter. You can therefore imagine my shock and devastation when I read of the wanton killings in Ile-Ife. I was somehow relieved when I heard that the terrible situation had been brought under control. Kudos to the security forces for the big task of separating the warring communities.

I have read different and conflicting accounts of what led to the war. In every conflict, there must be two or more parties involved.

In this particular case, all accounts I read pointed to a case of provocation and retaliation. I cannot confidently determine or say if the reaction was commensurate to the action, as propounded by Isaac Newton in his Law of Motion, but something definitely triggered the conflagration and dastardly massacre. I can still manage the news up to that point. But something else happened that rendered me speechless.

Those who should maintain the peace, protect the people and punish the homicidal lunatics who beheaded and murdered recklessly came in and took sides in the matter by arresting one party while studiously ignoring the order. “Which kind injustice be this?” in Fela’s voice. How can the prosecutor also be the Judge even before the case begin in the court room? I fail to see the logic in the mass arrests of Ife people and abducting them from the State of Osun to the seat of Federal Government in Abuja. Is it that the suspects just woke up and started shooting sporadically at anyone in sight, especially community? How come not even one person was picked up from the other obvious party in the imbroglio? I sincerely reject the excuses offered by the Inspector General of Police while trying spiritedly to justify the perfidiously odious decision to villainize only one party to the conundrum.

The bias of certain powerful forces is already palpable but extremely shambolic. I wonder if there are agent provocateurs and fifth columnists who are deliberately setting up our President Muhammadu Buhari for monumental failure. Nigeria has known no peace since we succeeded in sacking the profligate government of PDP. It is embarrassing that some government operatives cannot see what damage they are doing to our President who suffered so much personal attack because of the perception that he is an ethnic jingoist and religious bigot. There is a saying by the Yoruba that a man accused of being a thief should never romance someone else’s goat. Our President needs to rescue our people and disabuse the minds of Nigerians about his branding as a President who does not think other Nigerians are important except his own. Some of us labored hard to convince our people that General Muhammadu Buhari is a true Nigerian patriot who would come to defend every Nigerian, especially the poor. I still believe in him and wish to assume that some people are using his name to commit and perpetrate all kinds of malfeasance while he is ensconced within the gilded cage of Aso Rock.

The tension in Nigeria at the moment can be cut with a razor blade. Nothing is more dangerous than playing ethnic games in the midst of economic tragedy. Nigerians voted for change to enjoy the highfalutin promises we made them. We promised to deliver them from prodigal sons and daughters; liberate them from terrorists and general insecurity; rescue them from hunger and disease; eliminate ethnic and religious crises; provide jobs, social security and succor for our agonizing youths and many such goodies.

We did not promise to abdicate leadership responsibilities for irrational pursuit of personal vendetta and wars of attrition. We did not tell Nigerians that they would have to survive and live more by faith and promises than by concrete plans and effective and efficacious governance. We did not envisage the nightmare staring us in the face today so horribly. My appeal is to the President. Politics is give and take. Politics is about practicality. A good lesson came from America just last night. Democracy is a game of numbers. Being obdurate and obstinate have no place in democracy. Anyone telling the President that he can fight all battles and win all wars is a big liar. We saw what happened in his absence when a different approach was tried and tested, Nigerians were happy, joyful and hopeful and they cooperated beautifully with the APC government despite their prior anxiety and palpitation.

President Buhari should stick to a winning formula. He should encourage and empower his deputy, Vice President Yemi Osinbajo, to carry on with good news of the kingdom. There is so much to gain by this government collectively. I do not want to believe that President Buhari would want to blow this chance of a lifetime. I seriously doubt he would want to be remembered as a champion of myopia above being a national hero and global statesman. I pray our President would direct all his disciples to begin to act like nationalists and less of people determined to set fire to Nigeria and dismember whatever is left of the carcass.
Posted by Victor at 10:32