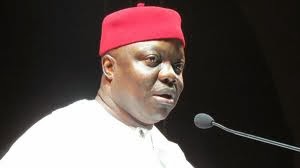 In reaction to some reports that Warri recorded heavy shooting yesterday,the State Government have come to the open to deny that such incident took place in the state.A statement signed by the SSG gave a clear [icture of what actually happened.


URGENT PRESS STATEMENT
RE: HEAVY SHOOTING IN WARRI
The attention of the Delta State Government has been drawn to media reports especially the on-line media of heavy shooting in Warri. The State wishes to state categorically that there has been no shooting of any form in Warri or environ.
In line with the agreement with NNPC for provision of security by the State Government for the $16 Billion Gas City Project in Ogidigben, the State Security Council at its last meeting in Warri on 30th December 2013, directed the security agencies to deploy some forces to the area to ensure the safety of lives and properties as the construction of the project will start in the next few days. Some of the forces were deployed today, 4th January, 2014. None of the forces has had cause to shoot any gun and nobody has been injured or dead.
The State Government is aware that some enemies of progress are out to thwart this laudable project of President Goodluck Jonathan which will form the economic bedrock for Nigeria.

Warri has been very safe and it is on record that there were no insecurity incidences in Warri and other parts of Delta State throughout the Christmas or New Year period. The Government shall not be intimated by anyone and all those spreading such seditious falsehood should desist from it.
All law abiding citizens are advised to go about their normal activities and we shall ensure safety of their lives and properties.

Signed:
Comrade Ovuozorie Macaulay,
Secretary to the State Government.
Posted by Victor at 08:05