New dawn in Ekiti as Fayemi's cabinet members are named 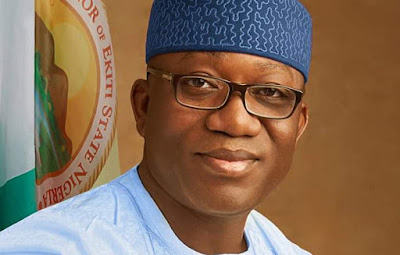 Ekiti state undoubtedly has the most literate population in Nigeria. Put at about 99% of young adults, and often reckoned as the state with most professors per family unit in Nigeria, Ekiti should boast of the most informed electorate. But many still argue that the ‘Aketes’ aren’t that smart in their choice of leaders. A position that became commonplace after the emergence of not-so-ingenious government in 2014. Governance in the state was famed for cockeyed policies and sycophancy. There was popular consensus among the generality of Nigerians that policies and programs were shallow and sometimes ridiculous. The ‘Stomach Infrastructure’ program, for instance, was a good point for a lot of new media enthusiasts to cackle on the people of Ekiti and their leadership choice.

But not in 2018! the electorate ditched the anointed candidate of the incumbent and went back to their well-educated governor, who they had voted out in the previous election. Friends of Ekiti across the world saw this as a remediation, and in the nick of time. The model of reality in Ekiti changed, with many out-of-home citizens beckoning on hope for their state, after such an inglorious term.

Now that the more poise Fayemi (an alumnus of the prestigious Kings College, London) administration is operational, is honour finally restored to the people of Ekiti? Are we going to witness a more structured, deliberate and comprehensive development drive in Ekiti State? Fencists would argue that its too early to judge, but a litmus test for every new administration is cabinet set up, the quality of which can tell what is to come.

H.E. Dr. Kayode Fayemi recently announced his, and it is expected to define what our hope should be for the Land of Honour and Integrity, with respect to what is attainable in the next four years. Fayemi inaugurated 14 commissioners and five special advisers on Tuesday, April 9, about six months after his inauguration, setting the stage for an evaluation of the character and capacity stock of his administration. Here’s a look at the apostles of Fayemi’s four-point agenda:

Bamidele Faparusi is a 46-year old politician. He hails from Ode Ekiti, and holds a Bachelor Degree in Electrical/Electronics Engineering from the Federal University of Technology, Akure.  He also holds an MBA in Project Management from the Obafemi Awolow University, and a PhD. (Honorary) from Commonwealth University.

Hon. Faparusi was a member of the 7th Assembly. He represented Emure/ Gbonyin/ Ekiti East Federal Constituency at the lower house from 2011 to 2015. .

Bamidele’s gross experience in both public and private sectors is an asset to the Fayemi’s cabinet.

Dr. Fayemi appointed one of the most educated Nigerian women on his cabinet in person of Dr Mojisola Yaya-Kolade. She is Nurse, Midwife, Pharmacist and Medical Doctor rolled in one. She has had a progressive life of education in health services. Beyond that, Mojisola worked with several international agencies as consultant. She is globally-sort-after expert who has made her mark in service to mankind as a health professional.

Dr Yaya-Kolade battled the governorship ticket with Fayemi, but stepped down at some point. She maintained that her progressive plan for the state motivated her to contest for the high seat of governor.

It is expected that Dr. (Mrs) Mojisola Yaya-Kolade will positively influence this administration with her own unique agenda, which were well articulated during her campaign for the office of governor.

Fayemi reached for his old tool box for Febisola Adewale. Hon. Adewale serves under him as Commissioner in the state Universal Basic Education Board (SUBEB) during his first term, and made his mark. He was at the assembly during the Segun Oni-led administration.

Hon. Adewale his an astute business, who holds a bias for holding his investments to his home state. All of his businesses are in Ekiti and Ondo, being neighbouring state. Commonly ascribed with qualities like calm and unassuming, Febisola is loved and known across Ekiti as an executor.

Muyiwa Olumilua is another experienced hand in the cabinet of Dr. Fayemi. He worked with him as Senior Special Assistant on Special Project during his first term, charge of the proper and precise execution of all Government projects, ensuring that such projects are executed to the stated specifications and details, and also their timely completion, as agreed within the terms of the contract agreement.

Son of a former governor of the old Ondo State, Evang Bamidele Olumilua, Muyiwa is an alumnus of the University of Lagos, where he got his BSc and MBA in Estate Management/Finance.

He is well-read and vast in administration. Hon. Agbeyo is a former Local Government Chairman in Ido/Osi Council during Fayemi's first term.

Dr Fayemi’s cabinet is also graced with Professor Adio Folayan. He is also material from Fayemi’s first term, where he served as Commissioner for Agriculture and Rural Development. Until his recent appointment he was working at Joseph Ayo Babalola University, Ikeji, Osun State as Dean, College of Agriculture.

He is known to be very intelligent, highly resourceful and frugal.

Folorunso Olabode, was Commissioner for Youths and Sports and later Rural Development during Fayemi's first term. He has a civil society background with biases for social mobilisation and rural development. Folurunso had his degree and postgraduate studies at the University of Ibadan and Obafemi Awolowo Universities respectively.

His ingenuity in grassroots development and exposure will add some panache to a government that is people-focused and also helps in transforming the state in all sectors.

With Alhaji Ayodele Jinadu, Gov. Fayemi returns another partner from his past. Alhaji Jinadu is grassroot politician, an excellent communicator and avid listener. He is one of those that could be regarded as home boys. He stays with the people and understands their plight.

Alhlaji Jinadu retired from the National Orientation Agency, joined politics and was appointed Commissioner for Culture and Tourism in 2010 by Dr Kayode Fayemi.

Alhaji Jinadu’s deep understanding of the need of the people would be a serious impetus to the transformation agenda of the governor.

Femi Ajayi is one of the few new names on Fayemi’s cabinet. He is a technocrat, who retired from the corporate world to serve in the state. He brings on board his undiluted private sector experience and networks to help in boosting the economy of the state particularly, in attracting investments. Fayemi’s goal of growing the internally generated revenues will require such hands.

Evangelist Foluso Daramola retired as a permanent secretary from the state civil service in 2015. He holds a Bachelors and Masters Degrees in Business Administration from University of Benin and Obafemi Awolowo University respectively. He also has a Postgraduate Diploma in Computer Science from the Federal University of Technology, Akure. He is a member and fellow of eight professional bodies and president of National ICT Public-Private Forum.

His knowledge of Information Technology and Communication will help in building the knowledge zone being proposed by the Fayemi administration.

Sola Adebayo is also returning to Fayemi’s cabinet. He served as the Commissioner for Works during his first coming. During his tenure he planned and delivered many key infrastructure projects. Sola is a younger brother to former Ekiti State governor, Otunba Niyi Adebayo.

Mr Davies Olusoga is another familiar member of Fayemi’s team from his first tenure. He was appointed caretaker chairman of Moba Local government, when Fayemi came in 2010. Mr Olusoga will be coming in with is exceptional people skills, as Fayemi moves to run his interactive government.

Mr Michael Awopetu, is one more technocrat on the new cabinet. He has no political experience but has been adjudged to share in Fayemi’s transformation agenda. MR Awopetu will be giving up his lucrative private sector life to serve the good people of Ekiti State in this administration.

It is obvious from Fayemi’s choice of his First Team, that he is not given to time wasting. Bringing back most of his tested first tenure appointees and aides reveals that he is not welcoming slow starters. He desire to hit the ground running.

Most cabinet members are experienced public servants who also have successful private sector runs. Quality education is a common factor in the profile of the appointees, reckoning the importance Ekiti people place on knowledge and education. Needless to say that this is a new chapter in the life of the ‘Aketes’, a new dawn. Hopes are high to watch this day unfold.

Victor Ojelabi is a political analyst. He lives in Lagos.
Posted by Beprobe at 21:03