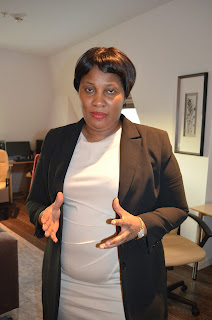 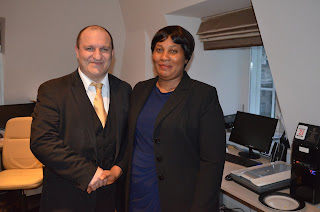 PROFESSOR Alexia Thomas is a Nigerian born, British
Naturalized citizen whose face is very familiar in most homes in United
Kingdom (UK) through her regular legal assistance to hundreds of
Commonwealth citizens entering UK having various Immigration issues or
court representation through her sound litigation attorneys who offers
several assistance to citizens of Commonwealth inside UK that are having
challenges with either the British police, Immigration or Home Office over
illegal arrests or detention.


Alexia, highly revered for her political stance, economic acumen, human
rights concepts amidst Commonwealth communities for her rich and deep
knowledge repertoire all over Europe and UK revealed that she renounced
her Nigerian nationality officially January 12, 2015 due to spiritual
ideology of Queen Elizabeth 1 living in her which led to her belief, “I
have renounced my Nigerian nationality on January 12, 2015 for British
citizenship. I still retain my Nigerian heritage with ancestry rights. My
skin may be black, but my mentality is that of a white person due to my
deep spiritual inclination with Queen Elizabeth 1 of England, Her Majesty
described in Hall of Fame as royal monarch whose name was epochal in world
history for her sense of duty, preserving English peace and stability at a
personal cost.”


According to Alexia, “Since Queen Elizabeth 1 lives in me, I strongly
believe Countries of Commonwealth nations deserve total freedom through
enforcement of free trade, travel and currency. We are to enforce Nations
of Commonwealth in prompt obedience to upholding Articles 9, 13,15, 22 and
26 of Universal Declaration of Human Rights (UDHR) 1948 United Nations
Members State Bonded Oath of Allegiance. I am in the know that based on my
work as an Independent Diplomat, I'm a Citizen of the World.”

“As the Royal Mother, President of Independent Diplomatic Commission, and
Chairman of Commonwealth Liberation Party, TCLP, our government is duty
bound through the instruments of law to enforce Treaty and eliminate undue
policies because policies will not, must not, should not and cannot
override Treaty.”


'My ideology brought salvation to Nations of Commonwealth & World at Large'

At her personal costs from her company headquarters in London, Alexia has
consistently empowered people from different nations of Commonwealth by
offering them employment in her huge company with active branch offices
in Coventry, Swindon, Nottingham, Peterborough, Reading, Chatham and
Dartford. On why she is doing this, she explained that “My ideology
brought salvation to Nations of Commonwealth and world at large. I have
paid the price. I am empowering people from different nations of
Commonwealth in UK being my way of giving-back to the society. At my
personal cost, I have really and still assisting people of Commonwealth
irrespective of their colors, race and languages. These are the reasons we
offer British Commonwealth National Card for Global Social Integration,
International Relations, Travel Clearance, Status Enhancement.”

'Her Knowledgeable', as she is fondly called by her global admirers around
the world, said “Protectorate Identity Commission ensures the protection
of identities of Commonwealth citizens and Non-Commonwealth citizens and
their Right of Recognition in the Globalized Sustenance of Economic
Relations. It is a new face in the culture of biometric credentials to
assist in the identification of Commonwealth citizens generality in
integration of information technology of the 21st Century Identity Act.
We facilitate the obtainment of Nationality documents for individuals of
the protectorate who are legitimate members of All Alliance Commission
owned to the Protectorate Identity Commission. We are duty bound to
facilitate the obtainment of International Passports from respective
countries on behalf of the Protectorate Identity Commission ,members
within their respective countries and within the jurisdiction where the
Office and Government of the Protectorate is located”.

Alexia said it is expedient that African Union Heads of State, Economic
Community of West African States (ECOWAS) get in touch with her, as she is
ready to offer her consultancy to them on Mythology, Optimal Government
Bureaucracy, Secrets of Ideal Political Ideology & Sound Economic
Self-Sustenance that would impact positively on humanity.
Posted by Victor at 21:13